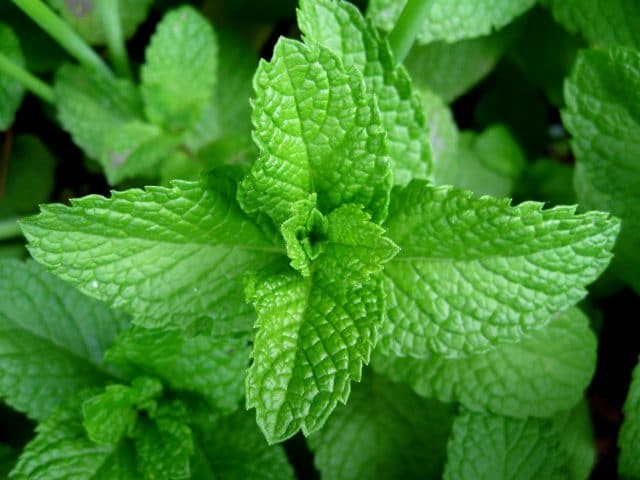 Print Recipe
Lamb with Fresh Mint
Savory rack of lamb with a hint of mint. An extremely hearty meal with a one-of-a-kind flavor.

Ingredients
Instructions
Share this Recipe
Mint is becoming more popular all the time. The amount of mint that we sell is amazing sometimes! There are many of varieties of mint. The most common being spearmint and peppermint. There are many uses for mint from medicinal to culinary, and sometimes it’s used solely for its fragrance. The United States produces 70% of the worlds spearmint and peppermint.

Mint is believed to originate in the Mediterranean region. It has been speculated that mint was introduced to North America with the arrival of the colonists, but there is evidence that North American Indians were using mint long before Europeans arrived on the continent. It has also been found in tombs in Ancient Egypt.

The myth behind the origin of mint is that Hades, the Greek God of the Underworld, fell in love with Minthe, a river nymph. When his wife, Persephone, found out she turned Minthe into a ground clinging plant so that people would walk on her and crush her. Unable to change her back into a nymph, Hades gave Minthe a beautiful aroma so that he could be reminded of her when people walked on her.

The essential oil, menthol, is what gives mint is amazing aroma. Perfumes and soaps have been made with mint since the Ancient Roman times. Ancient Hebrews would spread mint all over the floors of the synagogue because of the pleasant scent it released when walked upon. It has been widely used all over the world to aid in stomach disorders, heartburn and bad breath. Mint has a cooling effect on the skin and has been used to treat minor burns also. In some cultures, mint is a symbol of hospitality and friendship and is offered to visitors.

The culinary world has made mint one of the most widely used herbs. Mint is used in everything from sauces, jellies, teas, soups, meat and vegetable dishes, baked goods and salsas to name a few. It also makes a perfect garnish. I can’t forget the fact that it is awesome with chocolate! Consuming mint, even in small quantities, is beneficial. Mint is rich in vitamins A and C, contains B12 and minerals including zinc, copper, calcium and magnesium. It is also an antioxidant, helps control blood pressure and cholesterol.

The next time you’re browsing recipes and see one calling for mint, think about giving it a try. Not only is it a healthy herb, it’s pretty tasty!