It seems that the mint julep began as a medicinal mixture of brandy, sugar and, in time, mint. This originated in Virginia, not in Kentucky at all! During the 1830’s there was a brandy shortage. This is where Kentucky enters the picture. Bourbon became the new base for the mint julep. Add a little crushed ice and voila!!! The mint julep of today.

Early in the 20th century the mint julep was falling out of popularity. Kentucky author, Irvin S. Cobb, told the tale of his “old Kentucky home” in his book Irvin S. Cobb’s Own Recipe Book in hopes of boosting bourbon sales. Because of the imagery of southern belles, white porches and gentlemen sipping drinks such as mint juleps on beautiful summer days, the drink became popular again. In 1938 Churchill Downs named the mint julep the official drink of the Kentucky Derby.

Currently, during the Kentucky Derby weekend, around 120,000 mint juleps are sold at Churchill Downs. That equals about 10,000 bottles of Old Forrester Mint Julep Ready to Serve Cocktail, 1000 pounds of fresh mint and 60,000 pounds of ice! That is one busy bartender! 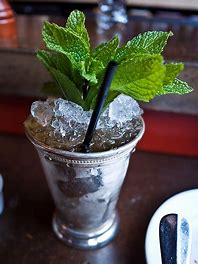