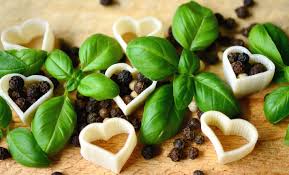 Did you know that for over 5,000 years basil has been an important part of many cultures? It is believed that basil originated in Asia, possibly as far east as the Hunan region of China, and was spread by seed and plants westward. Basil was introduced in Britain in the 16th century and, in turn, was brought to North America in 1621.

The first documented account of basil usage was in ancient Egypt where it was used in the embalming process. Possibly because of this, the plant was a symbol of mourning in ancient Greece. It was also thought to be a cure for the bite of the mythical creature called the basilisk. This made people turn to basil for relief from bites or stings from animals and insects.

In India, basil is sacred. It is associated with the Hindu god, Vishnu. Upon her arrival to Earth she was said to have taken the form of basil. Also, basil was thought to be a powerful protector and was placed around temples and used in ceremonies honoring those who had passed.

Basil was not used as a food product at first, (it was actually thought to be poisonous for a long period of time). Instead, it was used for its aromatic value as well as being symbolic. Basil was considered ‘kingly’ or ‘royal’, therefore, it was used to make perfumes that were used only by kings.

At some point basil became associated with love. Women would rub the leaves onto their skin in hopes that the scent would attract a man. In Romania, the belief was that if a man accepted a sprig of basil from a woman, he would fall in love with her.

In our modern times, basil is the most used culinary herb. There are at least 40 varieties of basil, some say as many as 60. Basil is used in everything from pesto and sauces to desserts and drinks. It is also used in the making of incense, herbal holistic remedies, and (still) perfume. Recent studies have shown that basil may possess antioxidant, antimicrobial and antiviral properties.

This barely scratches the surface of the history and uses of this wonderful plant we call basil. Check it out for yourself, you might fall in love!